Venetia Digby on her Deathbed

Perhaps a corpse was not such a terrible thing in days gone by. Sometimes when there was a death in the household a painter was called to record the scene. So it was when the beautiful 33 year old Venetia, wife of  Sir Kenelm Digby was found dead by her servant one morning in 1633. The painter called was the Dutch Master Van Dyke.

It was and is rare for an otherwise healthy 33 year old to suffer a sudden and unexpected death so there has been much speculation over the years as to the cause of Venetia's death. She may have been poisoned by the exotic ingredients of quack ointments and potions she was taking both to preserve her beauty and to ward off the plague which was then in London. 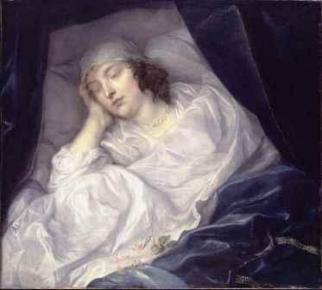 XVIII If Grief Could Burn Out

What is a good death? Ritual, whether religious or not, still counts

A thoughtful article in the Guardian about modern funerals, religious and otherwise, by an anthropologist studying the activities of the British Humanist Association.

I was struck by this:

Many of the families that humanist celebrants serve have no idea what humanism is, and many don't really care. What they care about, often, is that Uncle John didn't go to church and didn't want his funeral taken by the vicar.

And even more so in the comments, a clergyman says:

I have on a number of occaisions met and prayed with distressed familes who have had humanist funerals, becuase they thought that 'non-religious' meant C of E! A failing on the part of the church, the undertakers and the humanist officiants to impart what is what.

A very old Blessing, the words are said to have been given by St Francis of Assisi to St Anthony of Padua 800 years ago:

May the Lord bless you and take you into his keeping;
May He show you His countenance; and take pity on you;
May He turn His eyes towards you and give you His peace.

[March 2013] I put that in my blog in May 2012 but it seems I was mistaken. I don't know why it has become associated with St Anthony and St Francis but the words of the blessing are much older than 800 years. The blessing is the priestly blessing given in the Tora, and in the Authorised Version translated like this:

I was taking the funeral of an Irish woman recently and we were thinking of music which would reflect the Irish heritage that the family all wanted to remember. This is a tune which we didn't use, a wonderful calming piece for meditation, a song so beautiful in its sorrow that it is almost joyful. The Chieftans playing Women of Ireland.

The phrase is well known, the poem not so much; in fact I have never seen it in any of the collections of funeral readings. The English poet Ernest Dowson died in 1900 at 32 years old. He was no stranger to loss and mourning. He leaves us this beautiful short piece:

They are not long, the weeping and the laughter,
Love and desire and hate;
I think they have no portion in us after
We pass the gate.

They are not long, the days of wine and roses:
Out of a misty dream
Our path emerges for a while, then closes
Within a dream.

The Welsh Soprano Katherine Jenkins said that this is the song that she would personally like to be played at her own funeral. She recorded it herself but this version is sung by Cerys Matthews accompanied by Fron Male Voice Choir. It's a stirring tune and a great favourite with the crowds at the Millenium Stadium when the Welsh Rugby team play.

The words in Welsh are:

I don't ask for a luxurious life,
the world's gold or its fine pearls,
I ask for a happy heart,
an honest heart, a pure heart.

A pure heart full of goodness
Is fairer than the pretty lily,
None but a pure heart can sing,
Sing in the day and sing in the night.

If I wished for worldly wealth,
It would swiftly go to seed;
The riches of a virtuous, pure heart
Will bear eternal profit.

Evening and morning, my wish
Rising to heaven on the wing of song
For God, for the sake of my Saviour,
To give me a pure heart.

The English poet Henry Newbolt loved Somerset and the Quantock Hills where he had a house at Aisholt. He lived there from 1927 and referred to Aisholt as 'that beloved valley'

Pilgrim, no shrine is here, no prison, no inn:
Thy fear and thy belief alike are fond:
Death is a gate, and holds no room within:
Pass - to the road beyond.

All Posts of Funeral Poems, Music and Readings